On a sunny spring day, I visited the second exhibition held at the Social Science Library of Kobe University (Nada Ward in Kobe City). (The exhibition was held from February 15th to June 20th in 2008). I was accompanied with Mr. Nakagawa, the director of Japan Match Manufacturers' Association, and Mr. Matsumoto, the officer of the Association, who drove the car up to a steep hill of Rokkodai to the highest point, which was the front gate of Kobe University. It seemed to be tough to climb the hill by a bicycle, because there were no bicycles in the parking lot; I saw only cars and motorcycles there. In the schoolyard, new and old buildings stood in orderly fashion surrounded by tall trees, and I was overwhelmed by the elegant scene of those grand old buildings for a while. Then, I was absorbed in the academic atmosphere that I had forgotten for quite some time.

Kobe University is a historic university that celebrated the 100th anniversary in 2002; it was originally founded as the government-owned Kobe Business High School (Kobe Kosho) in 1902 (Meiji 35). 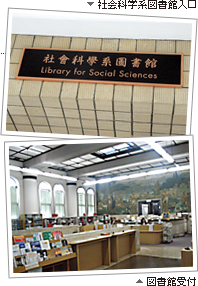 After going through the campus on the Rokkodai hill slowly by a car, we arrived at the entrance of the Social Science Library that had a dignified look of the old schoolhouse. Inside the building, we walked up the stairways to the area that was decorated with marbles in an old style, and time slipped away as soon as I was embraced by the library atmosphere. Passing through the reception desk, behind of which a huge painting was hung, we walked through the reading room that was furnished with graceful wooden chairs and desks like those seen in good-old-days, and arrived at the exhibition corner. The second exhibition was hosted by the Kobe University Auxiliary Library and the theme was "Explore the source of modern Kobe, Suzuki Shop, and 'rise and fall' of match industry."

The exhibition featured 18 pieces of valuable data and items that were mostly owned by the library, and was composed of the chronology and panel illustration showing the memoirs of Suzuki Shop and the match industry in Kobe. Though only a few of colorful items such as match labels were displayed and the exhibition was more like the description of some type of research, I thought the material was very informative for those who had already some knowledge of match industry in Japan, because the industries in Kobe and the enterprises' circumstances from the Meiji era to the beginning of the Showa were articulately explained with the historical background. Learning the data steadily looking at the chronology and the panel illustrations, I have found the intention of the exhibition was not only enumerating historical events of Suzuki Shop and the match industry, but also telling us the interrelated implication of Suzuki Shop, match industry, and Kobe Business High School in addition to the fact that those three were situated in Kobe City around the same period.

From Meiji Era to late Taisho Era, Suzuki Shop was the most flourishing trading company in Kansai area and had been as influential as other large trading companies like Mitsui and Mitsubishi; it traded sugar, camphor to start with, and later time heavy industrial goods such as steel and ship-building. In its history, the company building was set fire by the mob that was evoked anger by the media reports that the company bought rice out from the markets. But at that time, Yone Suzuki, the owner, and Naokichi Kaneko, the head manager, were very ingenious and successfully rebuilt the company back to the normal function. However, the company was fated to meet ups and downs, and went bankruptcy because of the international financial panic in 1927 (Showa 2). However, the spirit of Suzuki Shop has been succeeded till today by superior talents who graduated Kobe Business High School.

Those superior men have maintained the business of Suzuki Shop and many of branch companies have been independently operated till now in different name and in different type of business; they are Kobe Steel, Ltd., Teijin, Nissho-Iwai, Hohnen Oil, Nippon Flour Mills, Sapporo Breweries, Nippon Kayaku, Shosen Mitsui, Nippon Suisan, and Mitsui Toatsu Chemicals, Inc. Having had benefits from war boom during the World War I (European Great War), Suzuki Shop was once a giant company and managed more than 60 branch companies. Displayed chronology and related data such as Suzuki Shop News written by Naokichi Kaneko have convinced me that Suzuki Shop was the real magnitude. 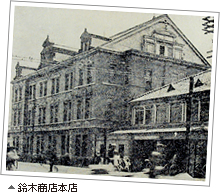 Following the business of Suzuki Shop from the exhibited chronicles, I learned the company was founded by Iwajiro Suzuki (the first owner) as an importer of European sugar in 1874 (Meiji 7) at the Coast Street in Kobe City; then Iwajiro began to handle camphor (the demand of camphor was extremely high as it was used for mothballs and material for celluloid which was a new product at that time) and peppermint for refreshing fragrance and material of medicine, and gained a great profit by virtue of his audacious way of doing business. In 1894 (Meiji 27) Iwajiro died of sickness and his wife Yone Suzuki succeeded his will and became the owner of the shop, and Naokichi Kaneko became the head manager; they accomplished the great progress adhering to their credo of management. Furthermore, Kaneko performed great achievement employing business maneuver of diversified operations such as management of import-export business and manufacturing and sales of camphor, peppermint, sugar, fish oil, flour, steel, and even shipbuilding. Kaneko established branch companies of Suzuki Shop after and after during Taisho era; they were Hokukou Sugar Refining, Teikoku Beer, the Osato Gristmill, Nippon Flour Mills, Harima Shipyard, Kobe Steel, Ltd., Teikoku Steamship, Taiyo Soda, Shin Nippon Fire & Marine Insurance Co., Teikoku Artificial Silk Thread, and Hohnen Oil Co., etc. Moreover, Kaneko founded "Teikoku Match Ltd." in 1916 (Taisho 5) to participate in the match business, which horrified people in the match industry because Suzuki Store would become an unbeatable opponent in the business competition. 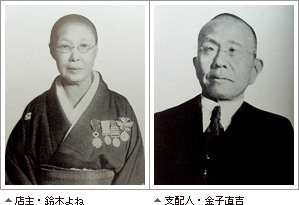 In 1918 (Taisho 7), the rice price continuously rose and rice riot spread throughout the country, then the riot occurred also in Kobe. Because the newspaper articles reported about Suzuki Shop's excessive stock of rice, they evoked the mob mistrust and the headquarters of Suzuki Shop was set fire to burn down. But, around those days, the European Great War ended, and Suzuki Shop had obtained enormous profits by exporting and purchasing goods with companies in chaotic European countries; therefore Suzuki Shop was well off to revive immediately. In 1919 and 1920 (Taisho 8 and 9), the annual turnover of Suzuki Shop was 1.6 billion yen (converting this amount to today's amount is gained by multiply it 500 times, so it is about 800 billion yen), which was the higher revenue than that of Mitsui & Co., Ltd., and the highest record in the business history of Japan. (From the story named "Rat" written by Saburo Shiroyama)

However, the dictatorial method Kaneko ran caused the sudden breakdown of the company when the financial panic occurred in 1927 (Showa 2); the Taiwanese bank, to which Suzuki Shop depended on solely, refused to give additional loans to the company. And Suzuki Shop went bankrupt in April, 1927. 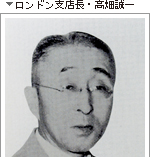 Suzuki Shop was run in such a dictatorial way, so it was called "Naokichi Kaneko's Suzuki Shop," but the employees, mostly graduates of Kobe Business High School, of the modern management sect (Kaneko belonged to the Tosa sect) had brought up the abovementioned enterprises afresh after the collapse of Suzuki Shop.

Especially, an employee of Suzuki Shop, Seiichi Takahata who graduated Kobe Business High School in 1909 (Meiji 42) gaining the best result, conducted a remarkably successful business with bold purchases in the European markets when he was the London office's general manager, changed the name of Japan Commercial Company, a branch company of Suzuki Shop, to "Nissho Incorporated Company (now called Nissho Iwai) after the bankruptcy of Suzuki Shop, and brought it up to an eminent general trading company in Japan. In 1957 (Showa 32), he also became the president of The Nippon Fire & Marine Insurance Co., Ltd. (presently NIPPONKOA Insurance).

There are many stories that describe Naokichi Kaneko's characters, and here I like to introduce one that tells Kaneko's tie-in with the match industry.

In September 1916 (Taisho 5), Seisuisha, a massive match manufacturing company in Kobe owned by Benzo Takigawa, and Ryosuisha owned by Gisaku Takigawa (original name was Kajioka) who was the son-in-law of Benzo Takigawa were merged, and a new company named "Takigawa Match Ltd" was established with the capital of two million yen. 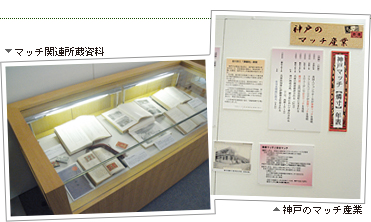 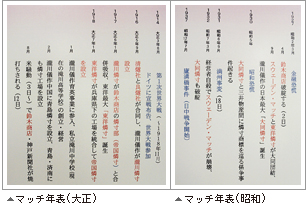 As I stated above, Kaneko also established "Teikoku Match Incorporation" in the same year investing the capital of one million yen as one of the new expansion businesses of Suzuki Shop. Kaneko, a shrewd man who had strong connections with the political world, was obviously the tough competitor to Takigawa.

Therefore, Gisaku Takigawa went to see Kaneko twice and asked him earnestly to withdraw from the match business for a reason of keeping the industry in the steady condition. Then, Kaneko said to Gisaku, "OK, if you say so, I'll leave it to you. I allow you to merge Teikoku Match Incorporation and your company." Being released from the pressure, Takigawa established a new company named "Toyo Match Incorporation" with capital of four million yen by combining Teikoku Match Company and his company; for which Suzuki Shop became the mainstay stockholder. After that, Kaneko never poked his nose in the management of Toyo Match Incorporation, and entrusted Takigawa entirely with match business since then. (From a book written by Kenichi Yokota 'Match industry in Japan and Gisaku Takigawa')

Kaneko was noted as a stubborn man, but I think that the above story demonstrates his integrity as characterized in the samurai world's saying, "The samurai doesn't have duplicity." With Kaneko's righteousness, business morality was not interrupted and the evolvement of match industry remained stable in Japan. By the way, a company named Teikoku Match Ltd was founded in January, 1918 (Taisho 7) under the management of Gisaku Takigawa, but it had no connection with Suzuki shop's Teikoku Match Incorporation.

This year is the 133th year since the domestic production of matches started, and the chronicle and panel boards including match labels in the exhibition manifested the progression mainly through exporting business from Meiji era, Taishou era, and to the beginning of the Showa era.

Especially, I was impressed by the noticeable panel picture called, "History of Match Labels." The first label displayed out of more than 30 pieces of popular labels in those days was "Nejishi" of Takigawa Seisuisha, which was the first edition of the match labels; then, "Sarujirushi" of Ryosuisha, "Momojirushi Karandouji" of Seisuisha, "Zou Best," "Gekkin," of Masanosuke Naoki, and "Onijirushi" of Ginbei Hata were shown. They were excerpts from the book named "History of Match Labels" written by Kita Shiun and published in 1914 (Taisho 3). 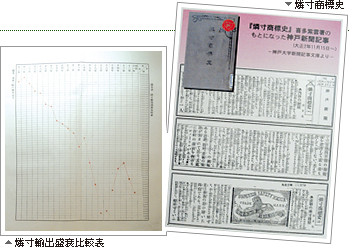 This exhibited material is collected mainly from the data owned by the Social Science Library and newspaper articles compiled by Kobe University Economy Institute of Management, and I think they were very useful and explanatory for visitors to understand the match business deeply.
This 'Newspaper Article Collection' is newspaper articles accumulated from 1912 (Meiji 45) for more than 60 years, and the number of articles exceeds 500,000. FYI, the Internet is open to the public in general as "Digital version newspaper article edition". The author also frequently utilizes the site when looking for an article related to the match, and it is very helpful.